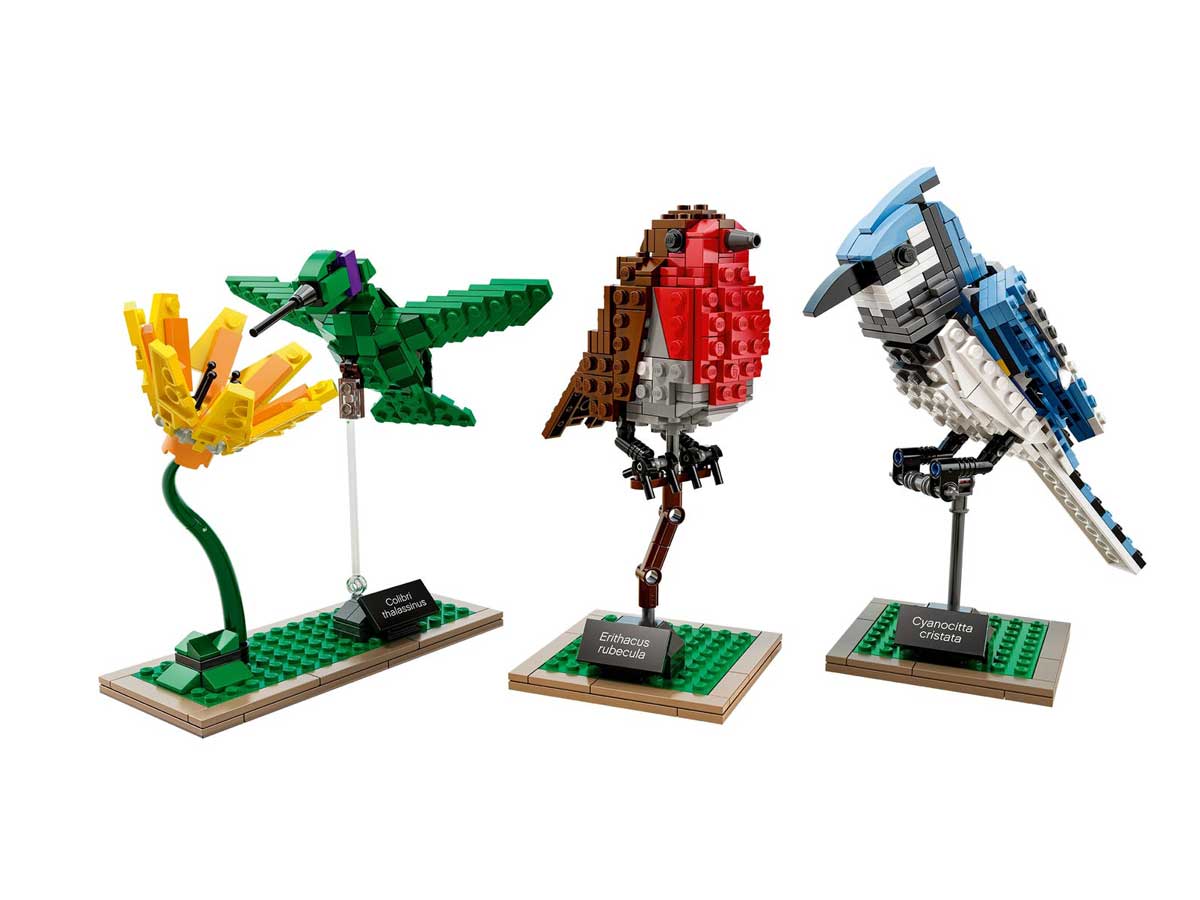 The Lego Ideas birds project was one of the first Lego Ideas projects to get mass appeal and coverage from many news outlets.

The set was created by British designer Tom Poulsom AKA DeTomaso. And though the final set featured just three models (robin, blue jay, and hummingbird), Tom had created many more lego bird designs. They are worth checking out, for inspiration if you want to add a few birds to your collection.

HOW DOES IT COMPARE TO THE ORIGINAL PROJECT?

Well, in a similar way to the Research Institute, The Lego birds project was originally a series of birds covering about 25 birds in total. Near the end of the voting state, perhaps with Legos input, the project entered a mini voting stage where people could vote for their favourite birds within the project. From this, it was suggested that the set would feature the three birds we see in the final set.

I think there are clear reasons why some of the birds wouldn’t make it to the final three. Some for example, include what Lego would consider “illegal” building technics, and may be trickier for some people to build at home – which is why they are illegal in the first place.

The official statements are below:

Due to the new CUUSOO terms of service I have had to change the idea behind my project.

I think it would be a great shame and an anticlimax for all of my dedicated fans and supporters if there was only one bird in a set from the dozens I have built so far for this project.

So I now suggest a set of three or four recognisable birds from around the world.

Below I have listed three small birds that came top in a recent supporter vote. I think these could easily be recreated by LEGO’s professional builders.

These three birds are well recognised around the world and would allow a larger target market as there is one European bird, one North American bird and a tropical bird.

In an ideal world I would like each bird to have a perch and a little plaque with information about the specific bird. I think it would be a bonus to have a soundbrick somewhere in the build with the relevant birds song or call.

If there are any concerns that LEGO CUUSOO have with creating multiple birds in one set and we have to choose just one then Bobby the Robin Red Breast would be my choice. He was the first bird I built and the inspiration behind this whole project. He is also one of the worlds most recognised small birds. If LEGO CUUSOO think that they could create a set using a different bird from my substantial collection then I would be happy for them to use one of these.

After all of the effort I have put into this project I really want it to pass the review stage so I am quite flexible with what the final set would consist of, the above are suggestions as to what I think would work best.

I find birds a great subject to build with LEGO and I’m sure from the great response I have had on this project that thousands of other people would too.

I also think that if these birds were turned into official sets they would be inspirational to both children and adults and would be a great gift for anybody. They would sell very well in zoos, museums, wildlife centres, and of course the LEGO store.

I really enjoy matching the different colours and features of our beautiful feathered friends and I hope that one day anybody else can have the chance to build their own bird from LEGO.

To see the birds I’ve built so far in more detail click on their name, but please don’t forget to support the project before you go elsewhere. Once you’ve supported please re check my page to see if you are actually “supporting” the project.

I really hope you enjoy these Birds and support me to help them take off.

Which one of my LEGO Birds is your favourite?

Thanks for looking and to everybody that has supported so far, we are so close now!!!