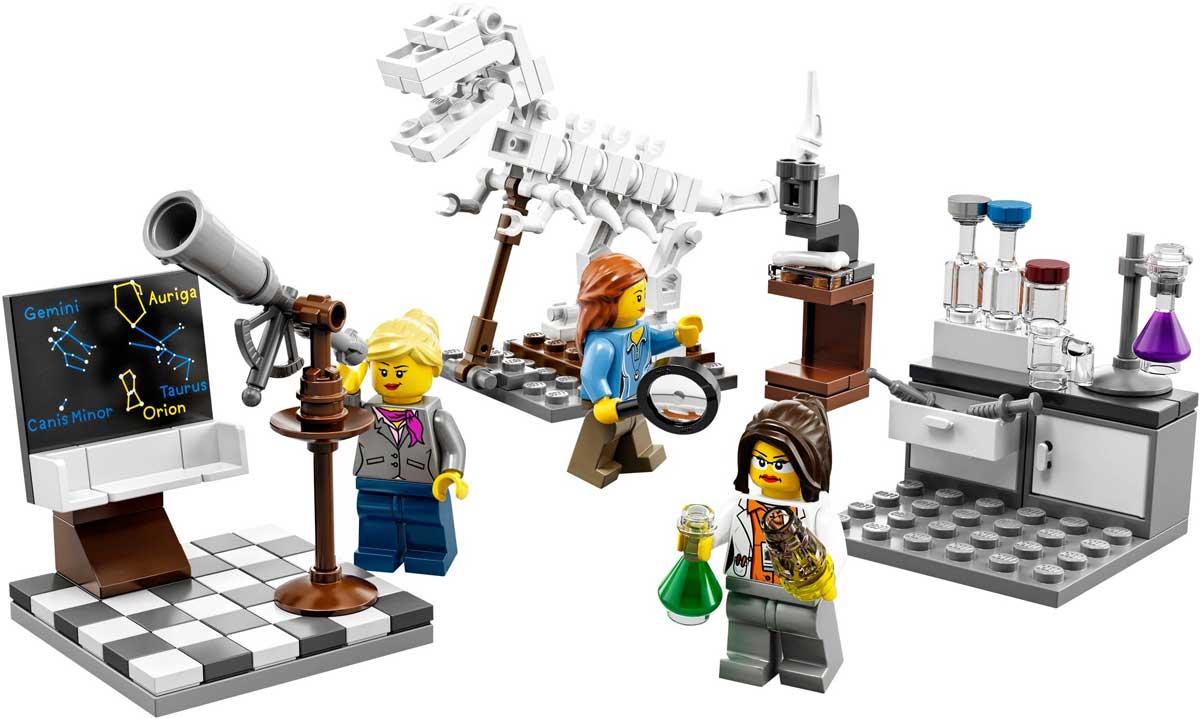 This set was built by Ellen Kooijman, who goes by The Lego Ideas alias of Alatariel. This is especially interesting when you find out that Alatariel has had not on, but two sets hit the 10,000 vote marker and make it through the Lego review process to become actual sets. she also made the popular Big Bang Theory set 😱

Explore the world and beyond at the Research Institute!

The Research Institute has everything that you need to explore the world below, around and above us! Created by real-life geoscientist, Ellen Kooijman (alias:Alatariel), and selected by LEGO® Ideas members (formerly known as CUUSOO), this collection of scenes depicts three varied professions within the world of natural science. Help the paleontologist study the origin of dinosaurs with the magnifying glass, map the skies with the astronomer and her telescope, and assist the chemist as she carries out experiments in her lab. This set also includes building instructions, as well as a booklet containing information about the creator and an introduction to each of the professions featured in the set. There’s a whole world of exciting professions out there to explore – build and role play them to see if they suit you! Includes 3 minifigures: paleontologist, astronomer and a chemist.

Ellen Kooijman AKA Alatariel is the first person to create two sets that made it to official Lego Ideas sets! And only one of two that has made it in total, the other being Andrew Clark (AndrewClark2).

This is also the first set to be branded as Lego Ideas, dropping the Cuusoo brand.

How does it compare to the original project?

The official set was released under the title ‘Research Institute’, whereas the original project was called ‘Female Minifigure Set’.

Although recently LEGO® has started to design and add more female figures to their sets, they are still a minority. A small set of minifigures would provide a great opportunity to add women to our LEGO® town or city communities. I have designed some professional female minifigures that also show that girls can become anything they want, including a palaeontologist or an astronomer. Being a geochemist myself the geologist and chemist figures are based on me:-) Due to the limitations of LDD the heads and hairstyles I used here are a bit limited. Ideally, Lego would use some ‘rare’ face and hair designs if they were to produce a set.

Each figure comes with a 6×4 base plate and a corresponding setting to enhance the building experience and stimulate creativity. The sets also come with lots of accessories, such as bones, vials, a magnifying glass, etc. I have designed 12 individual vignettes, but I imagine a selection of 3 would make a good box size.

Because the project is climbing to 10k really fast it’s time to evaluate which sets are most popular so Lego can take that into account when they review the project. Many people have left comments indicating their preferred designs – thanks! – and it is clear that the Science-based ones are favored. As such, I would like to propose that the final set will represent a versatile Research Institute comprising the labs of the Astronomer, the Paleontologist, and the Chemist:

The motto of these Scientists is clear: explore the world and beyond! The Astronomer discovers new stars and planets with the telescope, the Paleontologist studies the origin of the dinosaurs and the Chemist does experiments in the laboratory. The complete set consists of 138 parts.

Of course, the final decision is up to Lego. They could decide to produce only one of the vignettes in which case I would propose the Paleontologist. It’s also possible that they would like to make a bigger set. The Research Institute could easily be expanded with the Robotics Engineer, which is also highly popular.

You can download the building instructions from Lego (5.85MB)