After so few new figures have been released for LEGO BrickHeadz since the first batch, I was getting worried that LEGO had already pulled the plug, so I was quite surprised to see brand new Star Wars BrickHeadz sets on my recent trip to Tesco!

The initial batch of BrickHeadz saw the release of a selection of Marvel characters, and the DC characters from the LEGO Batman movie. Shortly after they released the Belle and Beast BrickHeadZ from Beauty and the Beast. The next official set was from another Disney property – Pirates of the Carribean, which saw the release of Captain Jack Sparrow and Salazar. But then nothing, until now.

Recently it was announced that there would be limited edition Star Wars double packs available, one being the Boba Fett and Han Solo in Carbonite set, another being Rey and Kylo Ren, but until now there had been no UK release mentioned, and nothing on the official LEGO shop beside the original BrickHeadz they released.

So I was more than a little surprised when I saw the Finn and Captain Phasma Star Wars BrickHeadz sets available to buy in Tesco! I took a picture and then looked at the Official LEGO site, and there is still no mention of the sets! So I guess exclusive really is exclusive when it comes to these sets. The sets also retail for £9.50, which is a nice discount on the original BrickHeadz price of £10 – every little helps, amirite!?

Well, that’s it, guys! If you are still reading this and not already on your way to the nearest Tesco, then you have my permission to go now… Happy hunting!

This LEGO® BrickHeadz construction character featuring Finn is fun to build using LEGO bricks that recreate all of his iconic details from the blockbuster Star Wars: The Force Awakens movie, including First Order Stormtrooper armor and utility belt. He also has a detachable blaster pistol and stands on a buildable collector’s baseplate with BrickHeadz icon for easy display in your home, office or anywhere you like.
Summary 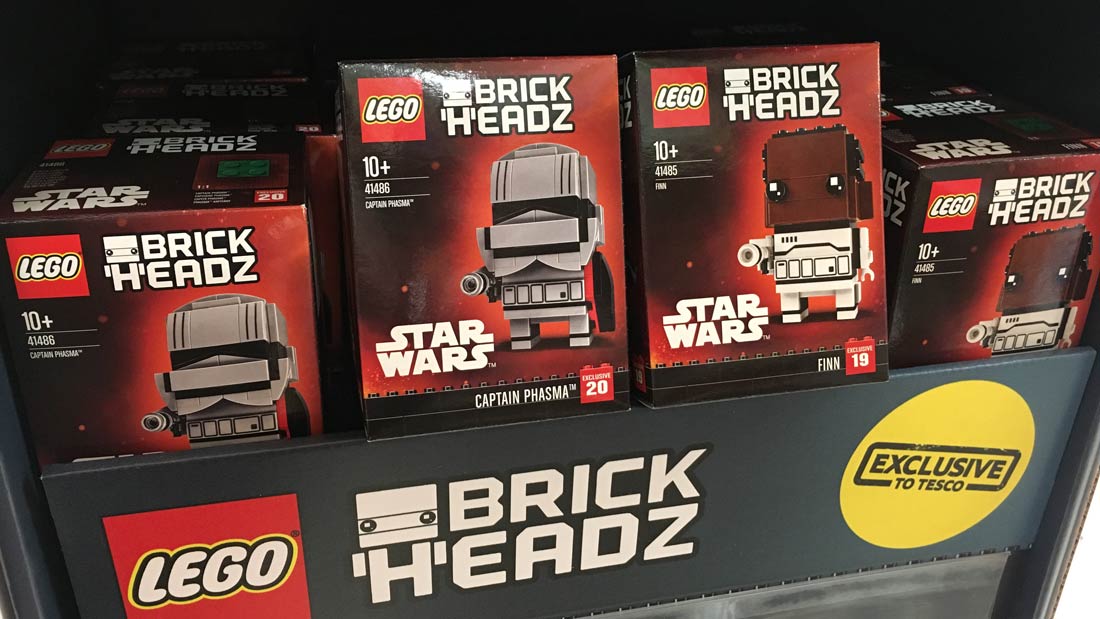