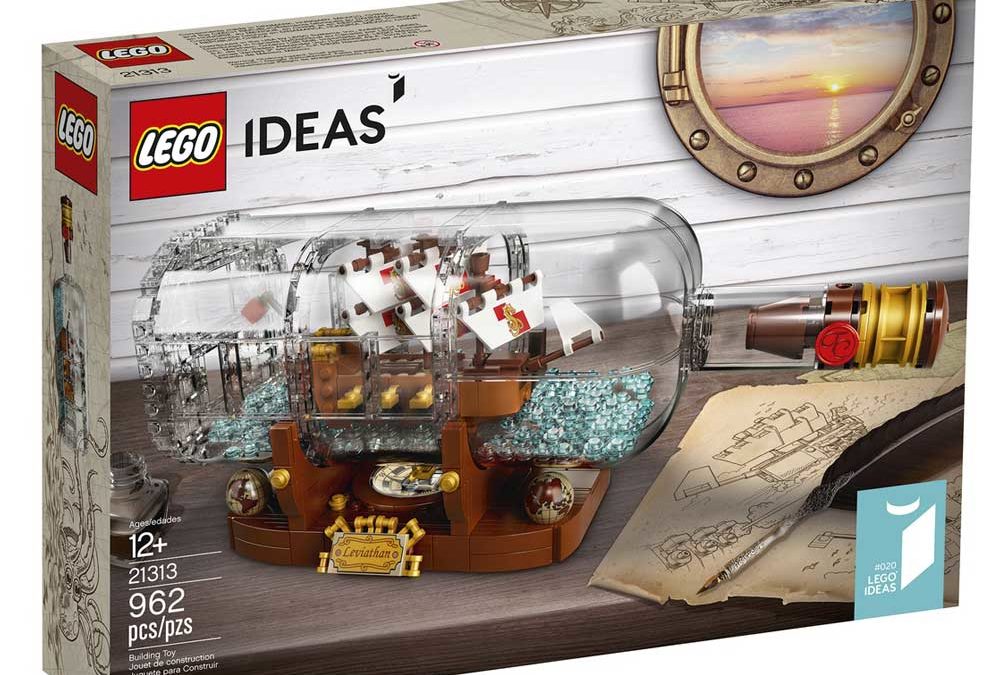 On the 1st of February, LEGO announced the availability of the newest LEGO Ideas Ship in a Bottle set!

I have been following this one for a while, and am glad LEGO decided to release this set. It’s great if you like ships, including pirate sets, and it great if you like displaying your lego sets, as it is designed like a display piece. This also includes a nicely designed lego stand to hold your bottle. 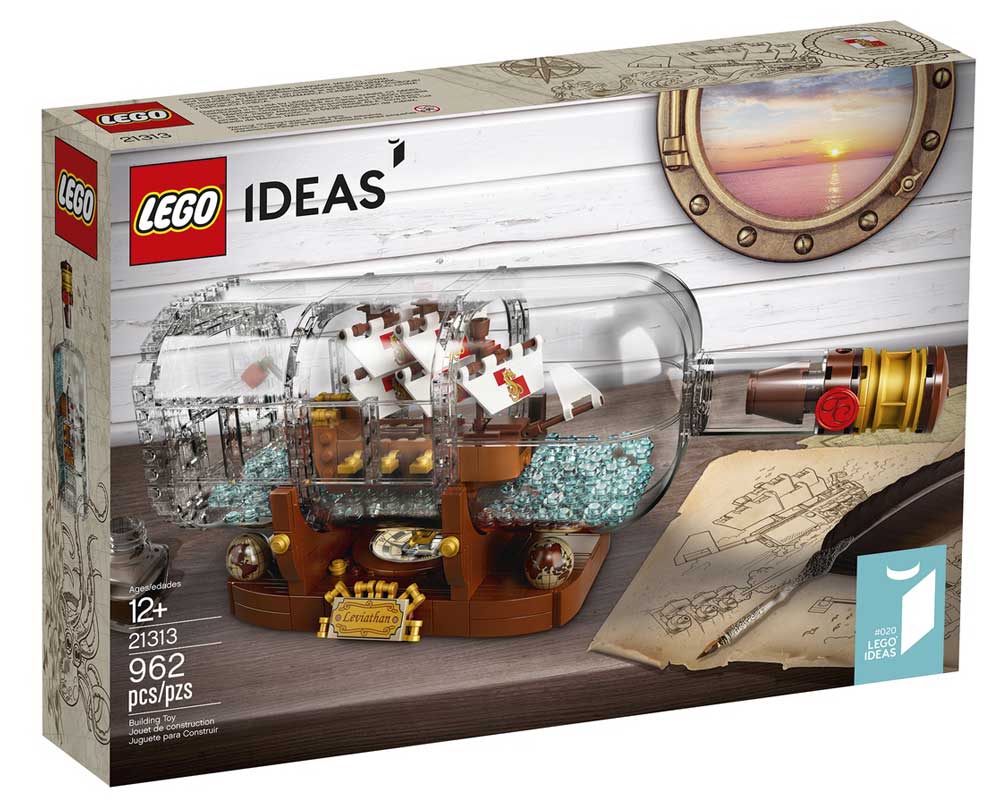 How is the released version different from the lego ideas version?

As is usually the case with LEGO ideas sets, there are changes and tweaks to design from the original version to the released version. Ship in a Bottle set is no different.

Some of the changes are quite nice, such as the more elaborate stand. Others are clearly a way to bring down the cost of the set, though that isn’t necessarily bad. The current set is priced at £69.99 RRP (check price on Amazon) in the UK, and without the changes would be much more. If the LEGO designers had stuck more closely to the original design, it would probably push past £100. The price, in turn, would mean people were less inclined to pick it up as an impulse buy. even at £70, it will be prohibitive for many people.

The key differences are the complexity of the ship itself. Also, reducing the ship in size, so that is can fit in a smaller, more streamlined, bottle. 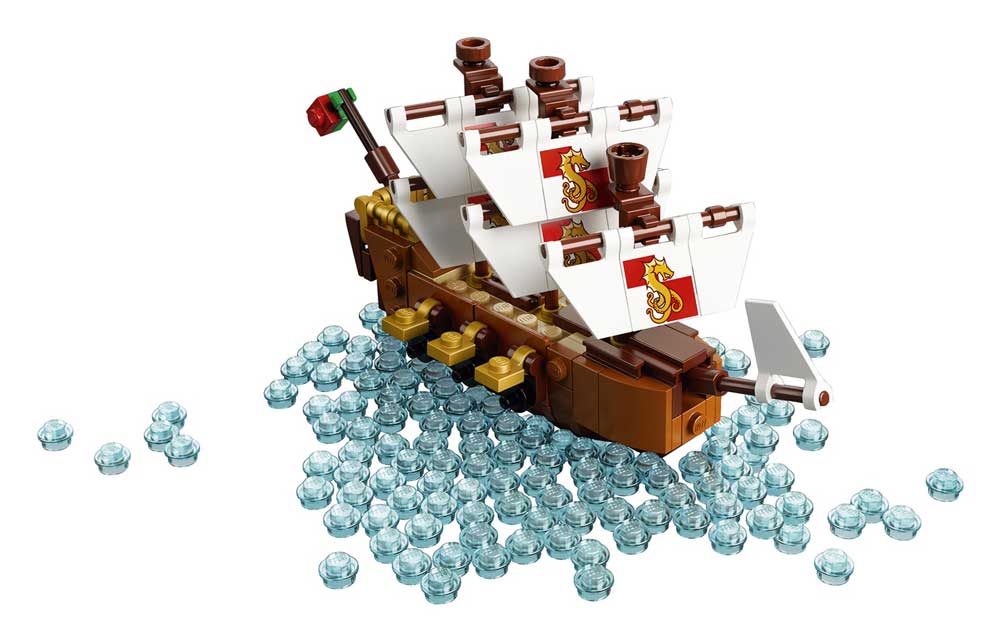 As you can see from the released version, compared to the original LEGO Ideas submitted design from Jake Sadovich (a.k.a. JakeSadovich77), the ship has been shrunk and simplified. While I love complex LEGO designs, such as the LEGO expert range, I can understand the need to make less expensive LEGO sets, to actually sell them. We are not all queuing up to buy the £650 LEGO Millennium Falcon after all.

Oringal Vs Final Pros and Cons

Overall, the nice additions seem like the refined design, though I’d still have like more detail in the final ship. 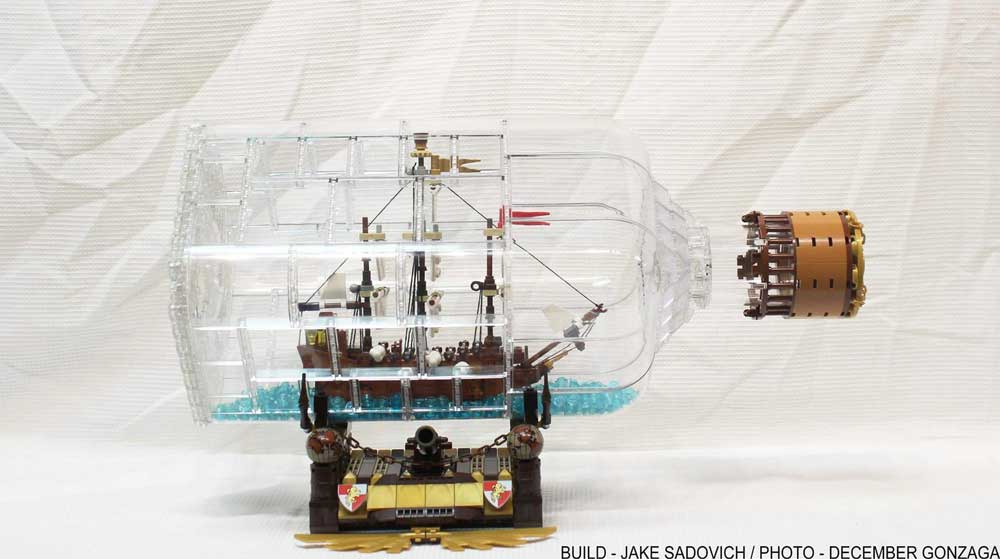 The original version of the ship in a bottle is far bigger and more detailed than the one that’s released. The first thing that you notice is that the original designer even included thread as rigging. I think this thread rigging would be hard to package into an official LEGO set due to its fiddly nature. It is, however, a nice additional detail, that I am sure people could have added on their own. However, the final released ship didn’t really include large enough sails to have any rigging.

You can see the thread rigging runs from the back and to the front of the ship from the largest mainsail (apparently called the forestay and backstay – Wikipedia), and it even includes three sets of rigging along the masts. For me, this really adds some nice detail that would be hard to achieve with LEGO alone.

You can also see that the bottle itself has another clear LEGO piece between the rounded corner pieces. This piece (just below the bottleneck) has been removed from the final version. So the width of the bottle is approximately 1/3 less in the final design.

Continue a nautical tradition when you build the LEGO® Ideas Ship in a Bottle, featuring a highly detailed ship with the captain’s quarters, cannons, masts, crow’s nest and printed sail elements. Fan creator, Jake Sadovich, was inspired by an actual ship in a bottle that he had built a few years earlier when he decided to build a replica in LEGO brick form. His creation reached the qualifying 10,000 votes with LEGO Ideas.

LEGO Ship in a Bottle Instructions

As with all LEGO sets, LEGO is nice enough to supply building instructions. If you are lucky enough to have enough spare pieces to build the set without buying it. You can get the instructions directly from LEGO right here.