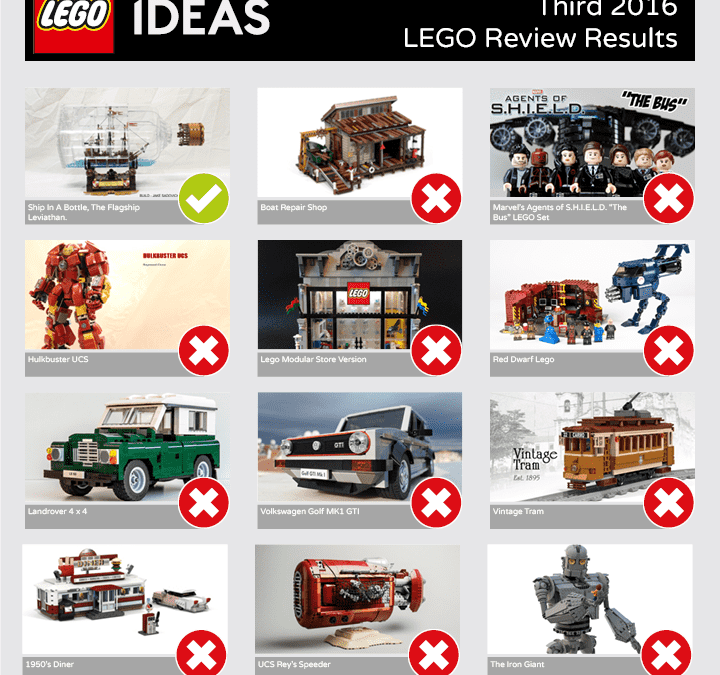 The LEGO ideas results are in for the LEGO Ideas review that took place as the third review of 2016. I had quite high hopes for this review, as there are some nice LEGO sets in the running including The Iron Giant and Hulk Buster.

All 12 sets in the review were: 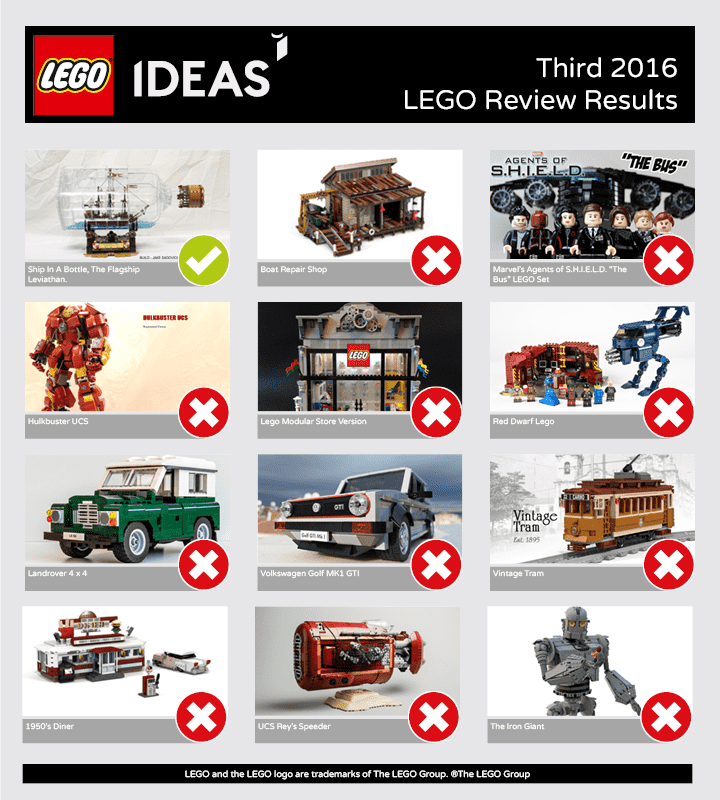 This review also included the results for Voltron, that had been held over from the previous review results due to “needing more time” to review the project, which probably translates to negotiating licensing and royalties for the project – which it passed and is now an approved kit.

The official LEGO video detailing the review results is below:

The official Statement is below:

Ship In A Bottle, The Flagship Leviathan.

Big congratulations to JakeSadovich77 on becoming the next official LEGO Ideas fan designer!

As an avid LEGO builder, Jacob Sadovich was inspired to create his LEGO Ship in a Bottle, The Flagship Leviathan, following a real-life ship in a bottle that he had built just a few years ago.

We’re really excited to be able to introduce Jacob’s Ship in a Bottle, The Flashship Leviathan set for its unique approach to what official LEGO sets can look like.

If you’d like to learn more about Jacob then make sure to check out his 10K Club Interview. 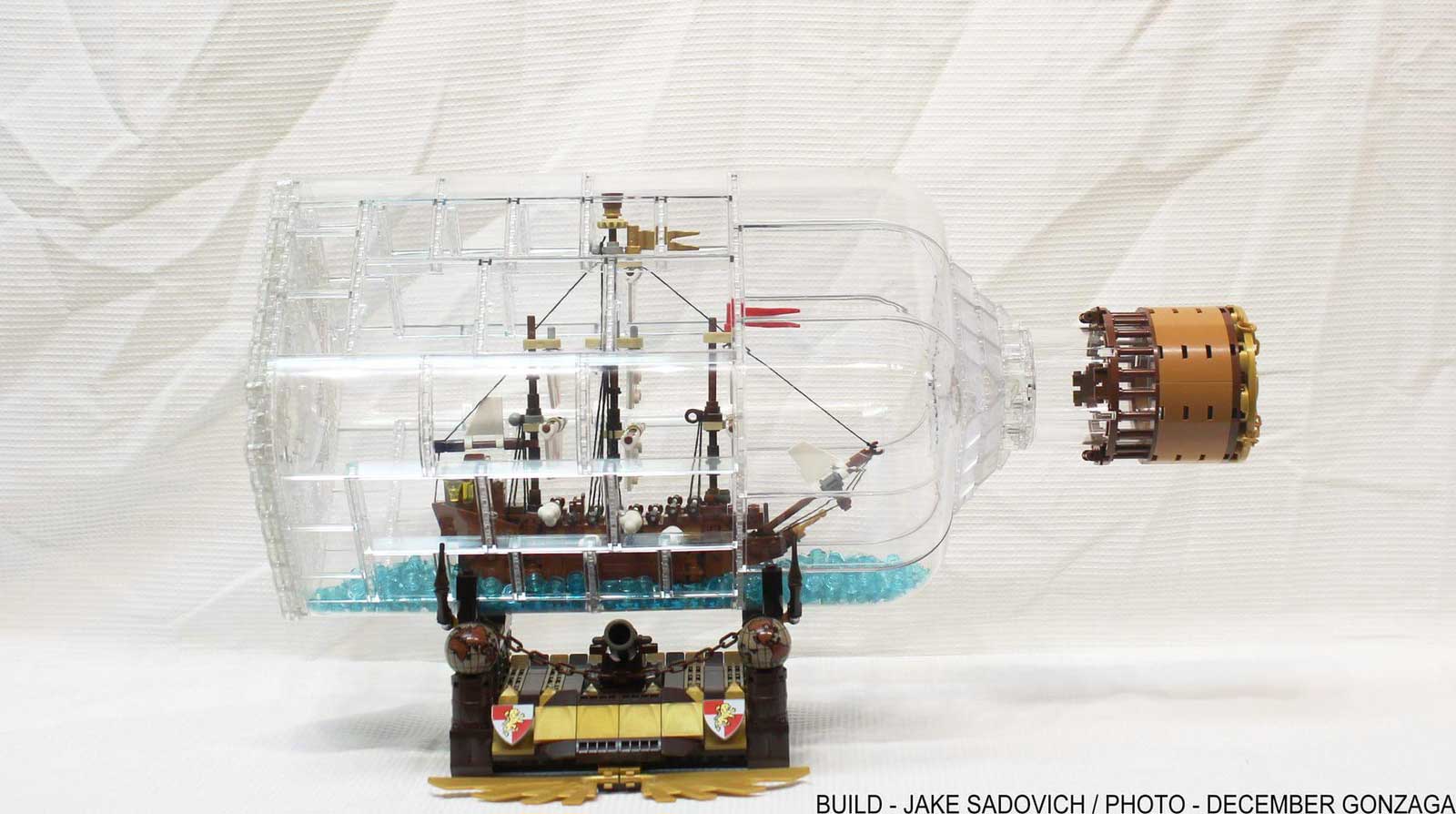 Voltron – Defender of the Universe

Big congratulations to len_d69 on becoming the next official LEGO Ideas fan designer!

We’re really excited to be able to introduce Leandro’s Voltron – Defender of the Universe set. Leandro’s project sets itself apart for its creative way to build with LEGO bricks.

If you’d like to learn more about Leandro then make sure to check out his 10K Club Interview. 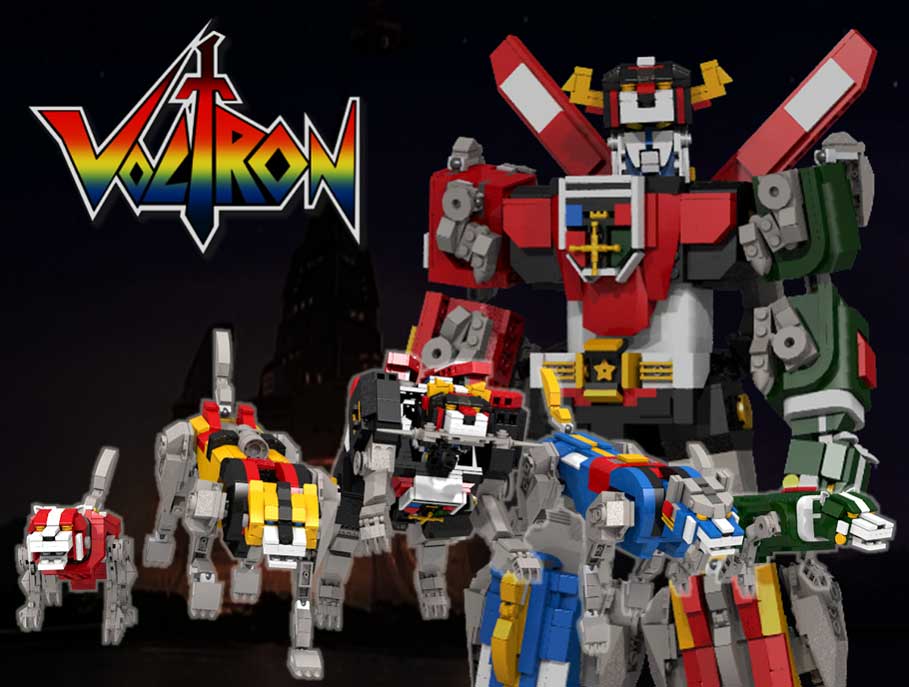 LEGO Ideas 2017 Review: My Breakdown and Reasons for Disapproval

Interesting set, but due to the size, it would be a pretty expensive kit, add to that, the feeling that it isn’t quite as finessed as some of the already existing LEGO planes lets it down a bit.

For me, this a real shame as I love the Hulkbuster suit, and this is a stunning version. The problem is, in the time since this was voted for, LEGO has actually put their own Hulkbuster suit into production as part of the Marvel superheroes range. The problem with that version is, it’s just a bit meh. It’s passable, and it is in a range aimed at kids, so they have to keep costs down, but I’d have loved to see this version make it through.

This is tricky, it nice, but not amazing. the novelty of having a LEGO store as a LEGO modular building might not actually turn into sales. The inside isn’t quite as interesting as say the LEGO stores I’ve been to. So I think that is why this didn’t make it – though life imitating art, imitating life is quite nice. I can imagine these being on display in LEGO stores themselves – scale replicas of the actual store 🙂

I love Red Dwarf, and my friend was even thinking of submitting a Red Dwarf inspired LEGO Idea. This set is nice, but not amazing. The set looks like Red Dwarf, but that is a bit bland. I think I’d prefer to see a Starbug if they ever release a Red Dwarf set. The other issue is that LEGO tends to like universal things, with international appeal, and I don’t know if Red Dwarf has that.

I had a LEGO car as a child that was for all intents and purposes a Landrover. I think this would only appeal to people with a love for that particular car, as most people would just see it as a 4×4 and that has been covered by LEGO quite well already.

After the Volkswagen Beetle and VW Campervan, why not add another iconic classic to the fold? Well, I don’t think the Mk1 GTi has quite the same widespread love and adoration as the Beetle or Camper. Though it’s fans are just as fervent, they are a smaller niche as far as I can tell. My friend would absolutely LOVE this model, in all its boxy, 80’s glory, but that is still a small market.

This is a nice, elegant model. I think something like this would be a nice addition, but it also lacks a bit of X factor. It could easily go unnoticed on the shop shelf. This has a very steampunk feel to it, and I’m sure people would love to make it. There really needs to be a way of selling MOC plans, so you can still get something for getting passed the 10,000 votes.

This looks the part, and from far away it looks quite big and costly, but on closer inspection, it isn’t as big as it seems. The designer should be very happy as they have really captured the subject, but that doesn’t mean it will translate into sales.

What can I say? This one actually did make it though, so there is no reason to write why it didn’t. However, though this is a lovely model that will appeal to people that like ships and ships in bottles, there are still reasons this could have failed. The ship itself is quite small, but the ‘glass bottle’ has to be pretty big to accommodate the model. Will people feel like they are paying a lot for a small model and some big clear plastic bricks? Time will tell. But it does look very nice, and is a nice addition to the LEGO Ideas lineup.

This kit has the same issues as the Hulkbuster in that LEGO already make a Rey’s Speeder! Don’t get me wrong, this LEGO Ideas version of it looks absolutely stunning, but if the RRP of that official one is around £20, then this one would easily be £60 – £100 and that may be a bit pricey for a Star Wars ship that isn’t yet a classic. There is also no precident for a LEGO Ideas creation becoming a UCS product. Maybe in a few years, they will release an Ultimate Collector Series version, but until then, we have to stick with the official version or building a MOC.

I was pretty disappointed this didn’t get through, though I am not really surprised. I absolutely love the film and have been a huge fan since its release. The problems with this LEGO Idea is that most/all of the images submitted are rendered from the LEGO digital designer (I believe), and that doesn’t mean it could actually translate to a model. LEGO obviously has certain standards, and a model should break just by looking at it. If you look at the pelvis area, I question if this small area could actually support the torso and upper body of the figure. I guess I will have to get my fix with the Sideshow Iron Giant statue instead. Oh well 😉

I hope you have enjoyed the LEGO ideas review.