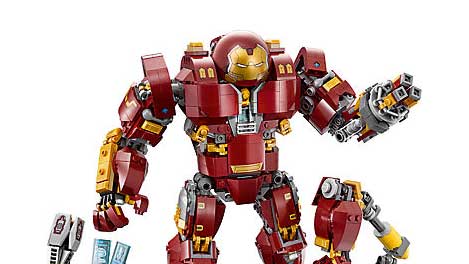 LEGO announced the Ultron Edition Hulkbuster recently, and though it is a few steps above the standard version they are releasing to coincide with the film (Avengers: Infinity War) – I have to say, I am a little underwhelmed.

This is an Ultimate Edition LEGO kit, but with the play on words using Ultron instead of Ultimate. When I first saw it, I wasn’t even sure if it was a UCS edition, but the classic black and white printed specs imply that it is.

Not to worry though, because if you have some extra time a few spare bricks lying around, we have found a tutorial to bulk it up nicely: LEGO Hulkbuster Ultron Edition – Mod.

Back to the standard version, and there are a few things that I think they could have added, especially aiming for a relatively high price tag. I think they could have just splashed a few extra coins on getting it to the level that many of us have been wanting. Even if they scaled back the detail of the display stand so that they could get the suit really looking the hefty part.

While this set can be modded to look closer to the Hulkbuster suit from Infinity Wars when you are spending £119.99 do you really want to be spending more on extra pieces to get the set we actually want? So while there is a promising upgrade path, I feel it’s a bit of a letdown that I am already thinking about changing the set.

The Hulkbuster should be a goliath, Its shoulders are supper-wide and bulky, and this set just doesn’t have the heft that I personally feel it should. I have included a shot of the film incarnations of the Hulkbuster suit for you to make your own opinion.

Anyway, have a great day, and let me know what you think of the Hulkbuster suit below 🙂